More and more headlines are mentioning a coming recession. If we really are headed toward a recession, what does it mean and what should investors do?

It comes as no surprise that we may be headed for a slowdown in the economy. Starting with high inflation sparked by excessive free money from the government, restrictive energy policies, supply chain disruptions during the COVID lockdowns, and now the war in Ukraine, it is not unexpected that the economy may be headed for a reset.

A recession is defined as a significant decline in economic activity. It isn’t easy to spot a recession - or at least exactly when one will start and when it will end. Since the financial media loves to report that the sky is falling, it feels as if a recession is usually right around the corner. Even when everyone agrees that one is most likely coming, it can still be very difficult to determine exactly when and how severe.

In the early 90s we had an instance where a recession officially started and ended before the recession was announced by the group responsible for dating these events. Recession indicators are backward looking, we live in the present, and the stock market is forward looking. This can make the art of economic predictions rather difficult.

Does Anything Good Come from a Recession?

For some individuals and families, a recession can be devastating. Those who lose jobs or businesses are often put in very difficult financial situations. Yet, as bad and scary as they are, recessions are a normal part of the economic cycle and play an important role in long-term economic growth.

It is helpful to think of recessions as being similar to forest fires—short term destruction that clears a path for long-term growth. With a forest fire, eliminating underbrush clears the forest floor to make room for future growth. Regular small forest fires can protect against raging widespread fires that can engulf residential areas. With a recession:

Recessions and the Stock Market

Investors are often concerned about their nest egg when we approach or enter a recessionary period. History shows these fears are often a waste of good energy.

Going back to 1950, there have been eleven recessions. When we look at the stock market (as measured by the S&P 500 Index) returns before, during and after these periods, we find some interesting information. 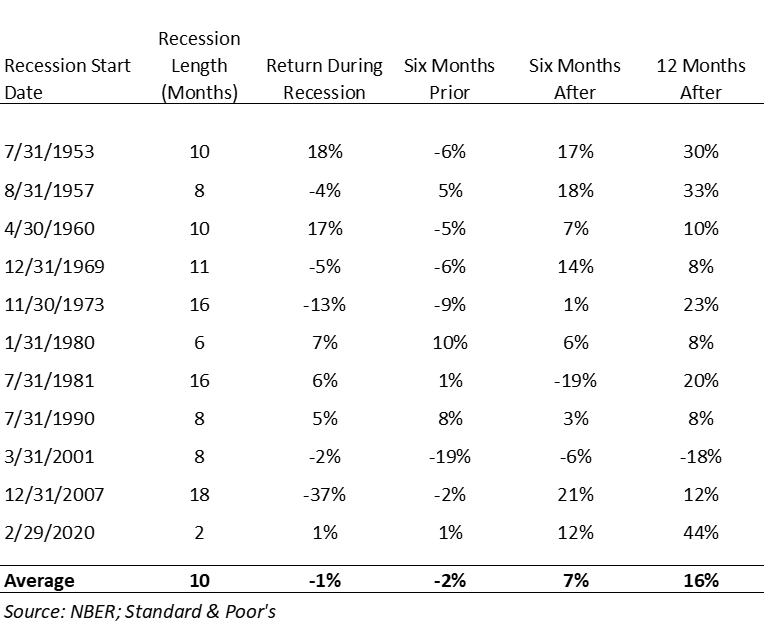 As we can see, nine of the eleven recessions had positive returns after six months and ten of eleven had positive returns after one year. Conversely, the 2007 recession had a negative 37% decline. It is worth noting that for those investors who were able to stay the course or continue investing through a 401k or investment account, they made out quite well when the recovery materialized.

Control What You Can Control

We’ve all heard the advice and it applies here as well. There are several things you can do before and during a recession that will lessen the blow and/or put you in a better position on the other side:

We don’t really know if we’re headed for a recession but what we do know is that we’ve been through scary times before and those who kept a clear-eyed view for the long-term and stuck with their plan did just fine. Even if a fire is coming, the new growth shouldn’t be far behind.